Posted by Gorseinonboy at 15:34 No comments: Links to this post

Beijing ~ Where it Sizzles!!

Beijing where it sizzles 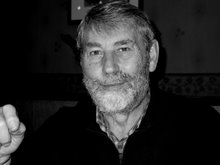